skip to main | skip to sidebar

Six years ago I replaced the incandescent bulbs in the combination tri-color/anchor light at the masthead with LED units.  The light itself is an Aqua Signal Series 40 originally supplied with a 25W sailing light and a 10W anchor light. Each replacement (Dr LED) uses only 1W so the energy savings are substantial.  However as you've guessed, the dollar "savings" were painfully negative.

When testing gear this season I discovered that the tri-color was fine but the anchor light was not.  This wouldn't normally be an issue since I prefer deck level anchor lights, but this sort of thing tends to annoy.  I decided to make the repair. 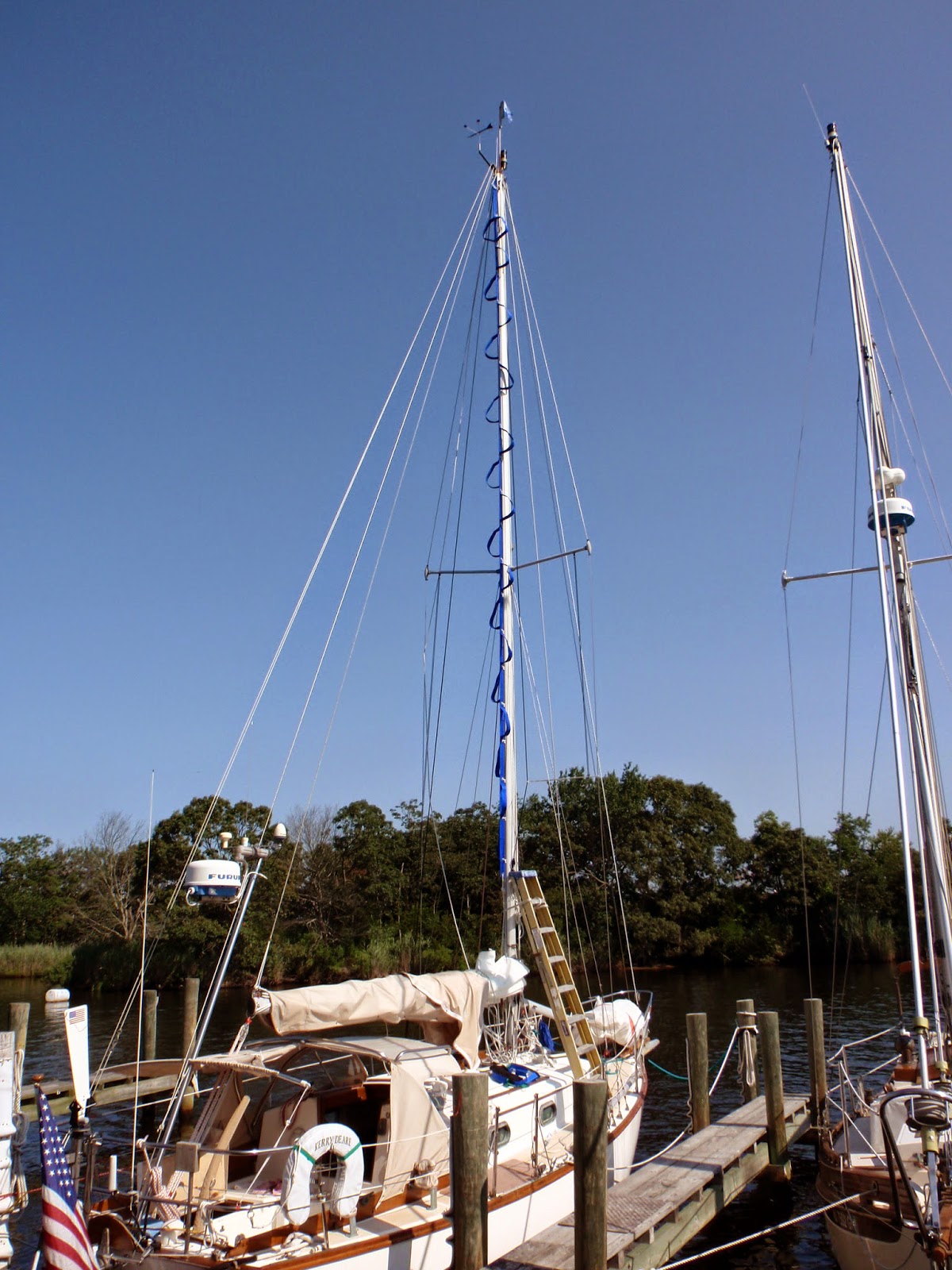 Testing indicated the problem was with the bulb and after obtaining the ($60.00) replacement, I asked the yard to go up and do the job.  Unfortunately the crane normally used wouldn't reach the masthead, and getting enough experienced bodies to put me up in the chair was unlikely.  Other factors including impatience led me to rely once again on my MastMate climbing system, pictured in the photo at right. 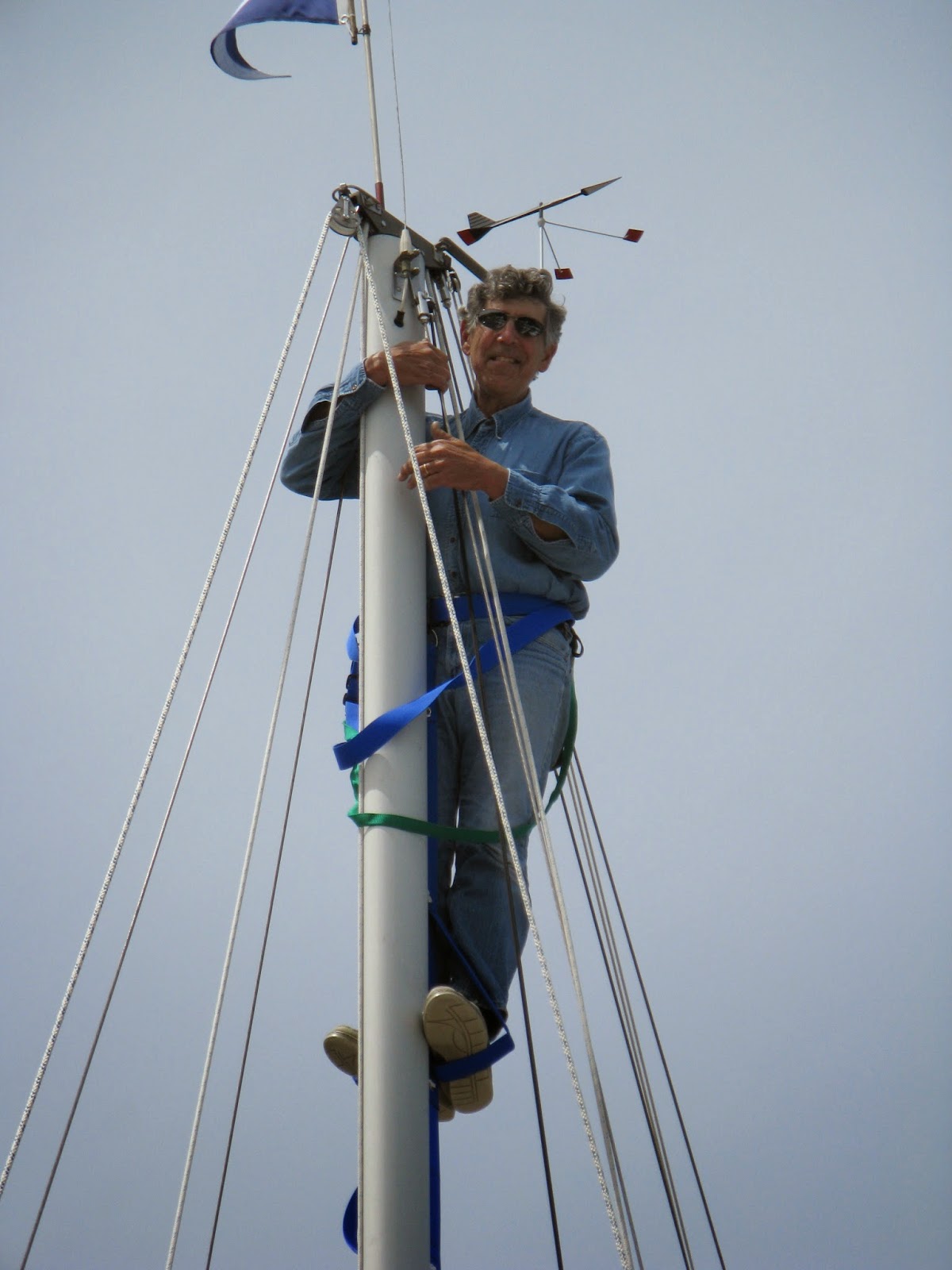 The MastMate is a first class piece of gear.  I'd used it 4 times in the past 6 years: twice at the dock (photo right), once offshore en route to Bermuda, and once in harbor in Bermuda.  Each instance forced me to question my own sanity.  If you disagree, please refer to the photo below. 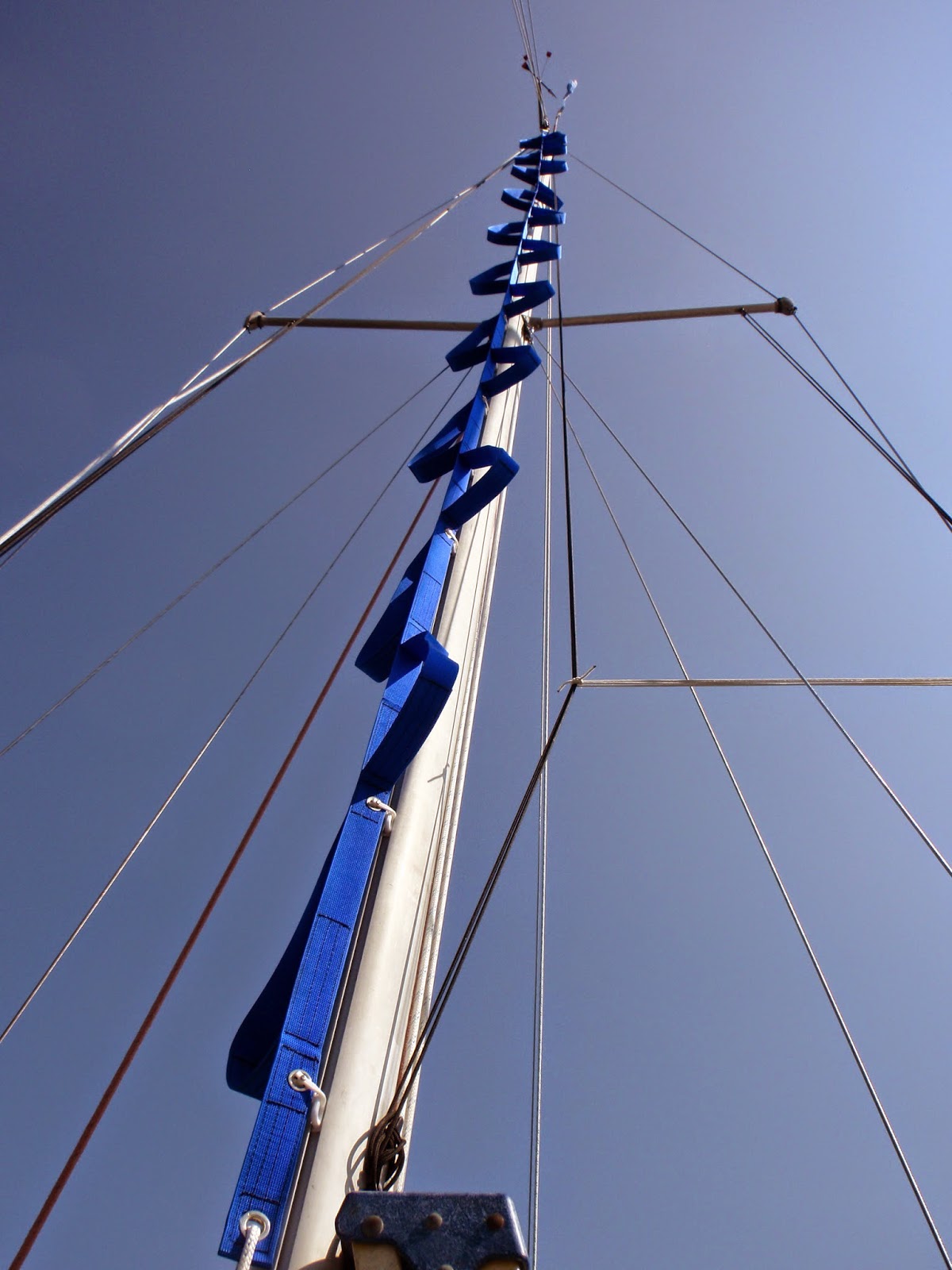 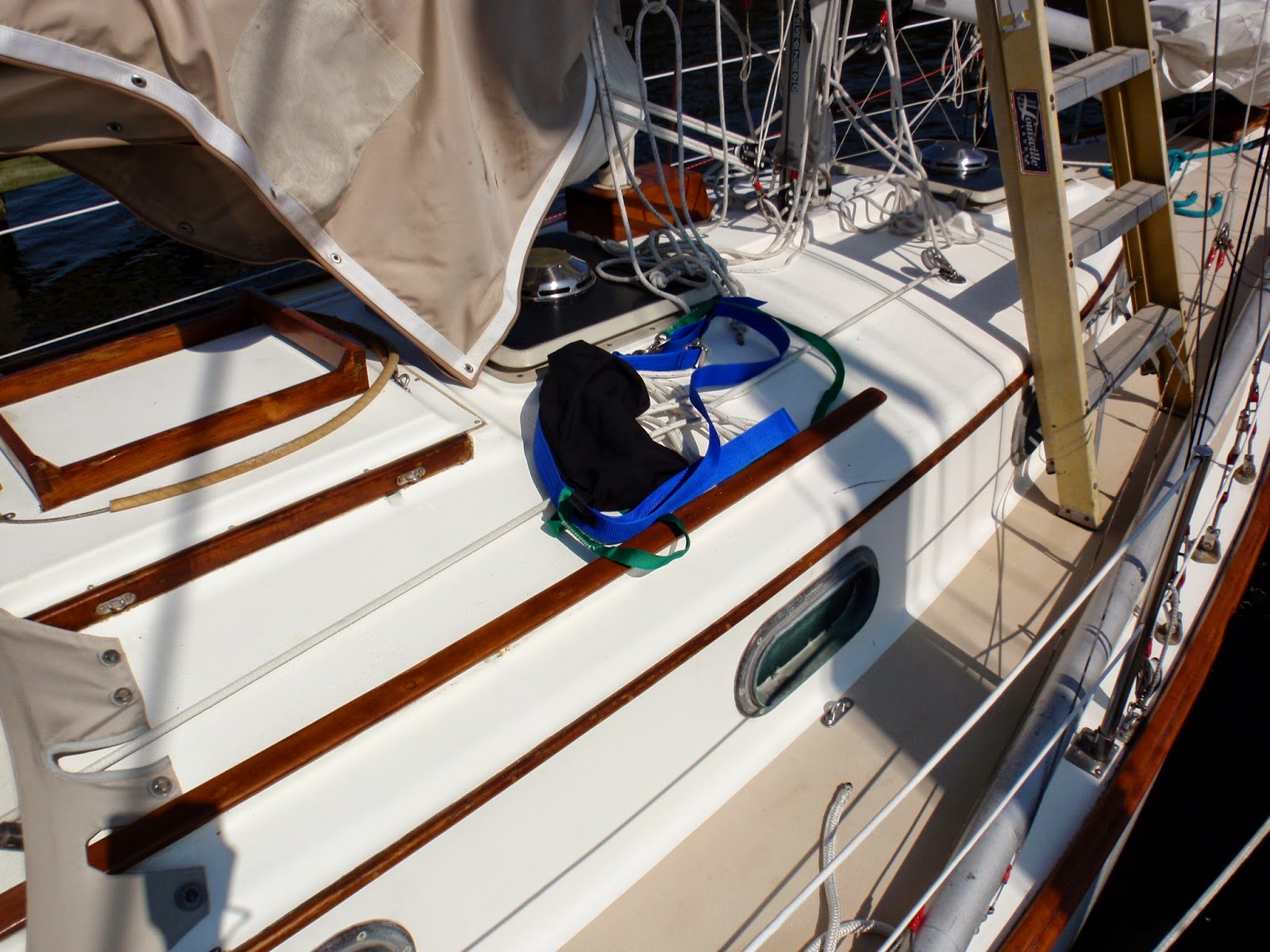 It happens that the system works well.  I speak from the perspective of hating anything to do with higher altitudes, but common sense and the right gear makes it possible to survive the ordeal.  "Right Gear" includes a purpose built harness system available from the manufacturer (photo right).  I modified this rig to add another tether that's used when passing the spreaders (green webbing), so one is never unsecured.  I now feel sufficiently confident working at the top, but that's not to say I want to do it again next week.
The most pleasant part of an operation like this is stowing the tools and gear afterward.  If you are in a position to be stowing the MastMate after use, it indicates you're probably still alive.


Aboard the "Kerry Deare of Barnegat" Local Time 13:20 No comments: 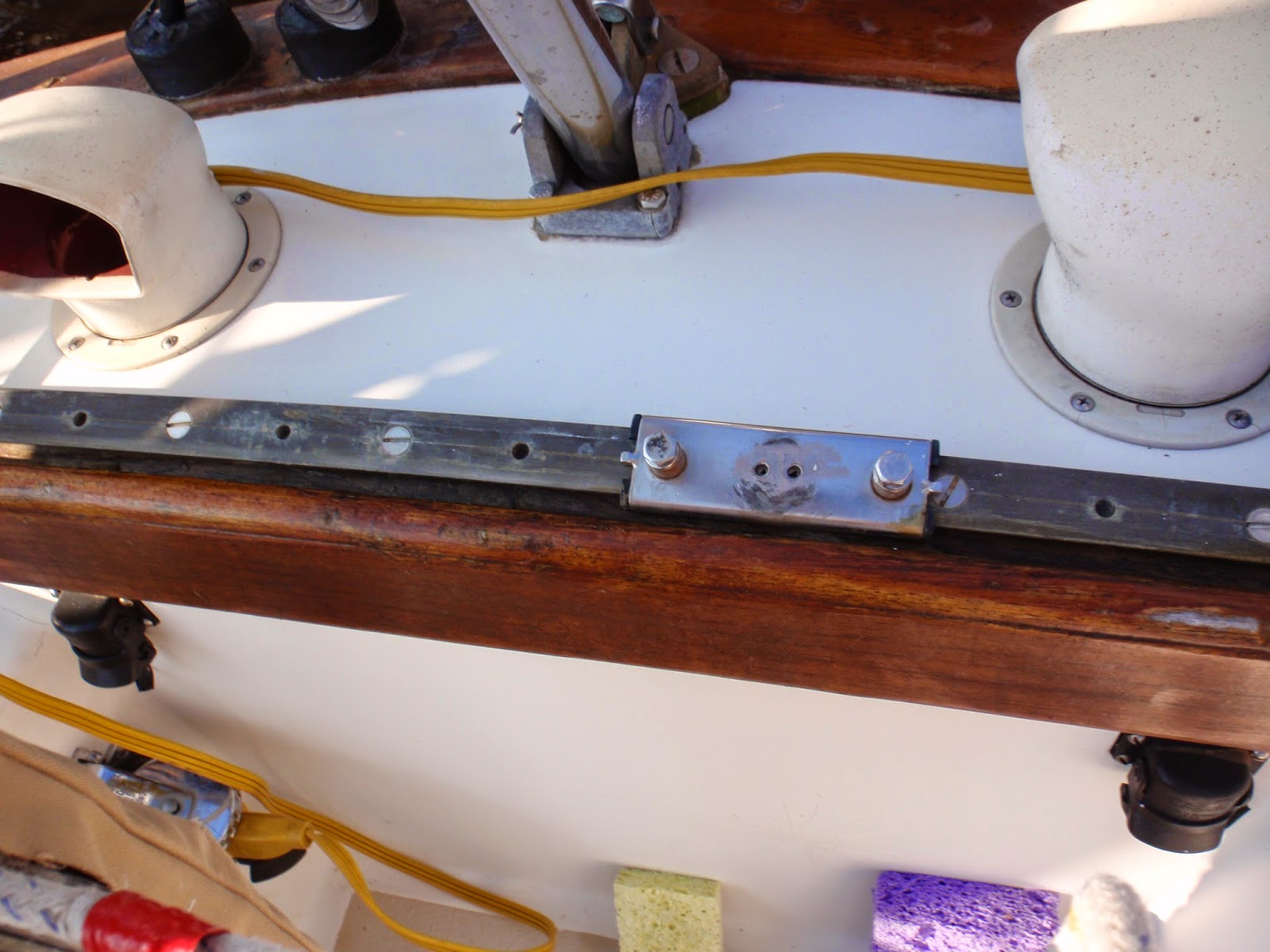 Several years ago the Shaffer lower double block for the main sheet parted from the traveler slide during a short New England cruise.  I was able to limp by for quite a while until the system again failed in Newfoundland in 2010.  I was able to jury rig a repair with the help of a local fisherman, but the job needed to be addressed properly.  The slide is shown in the photo.  This article shows the repair. 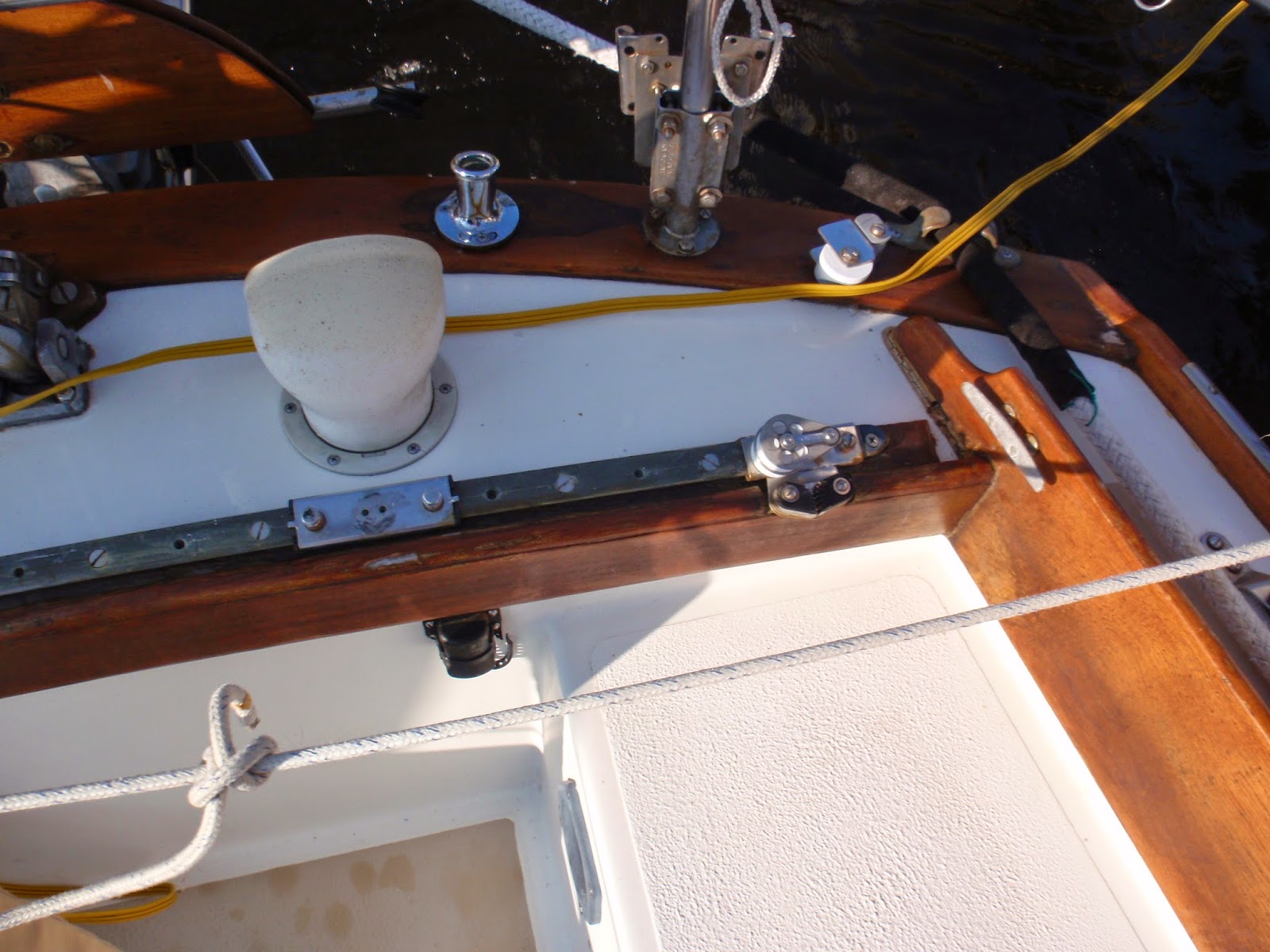 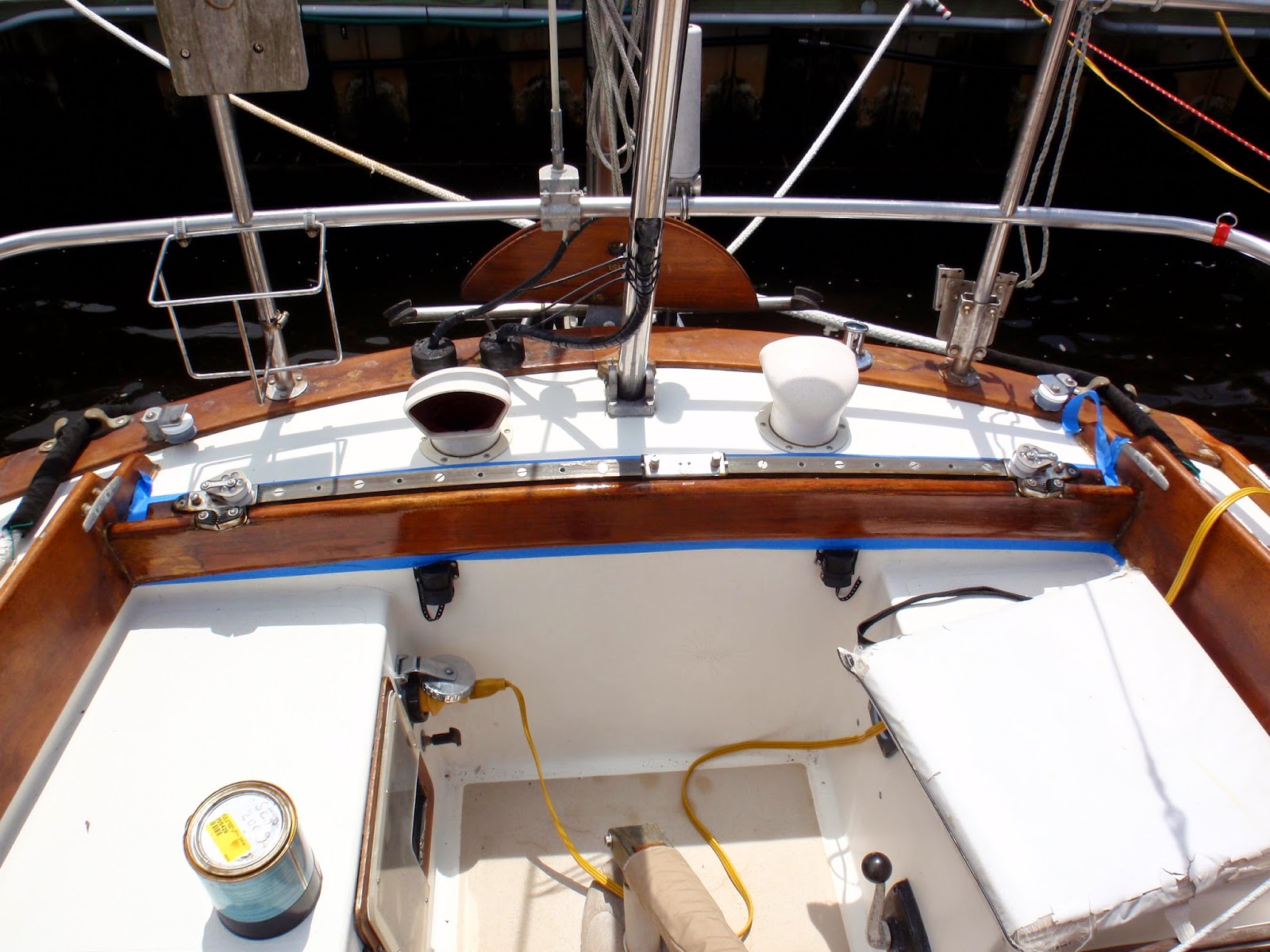 Note that the slide has two welded  posts that secure the traveler control blocks.  I decided to fabricate (actually have fabricated) the new mount so that it fit over these two posts.  First I cleaned up the teak on which the traveler track is mounted (photo). 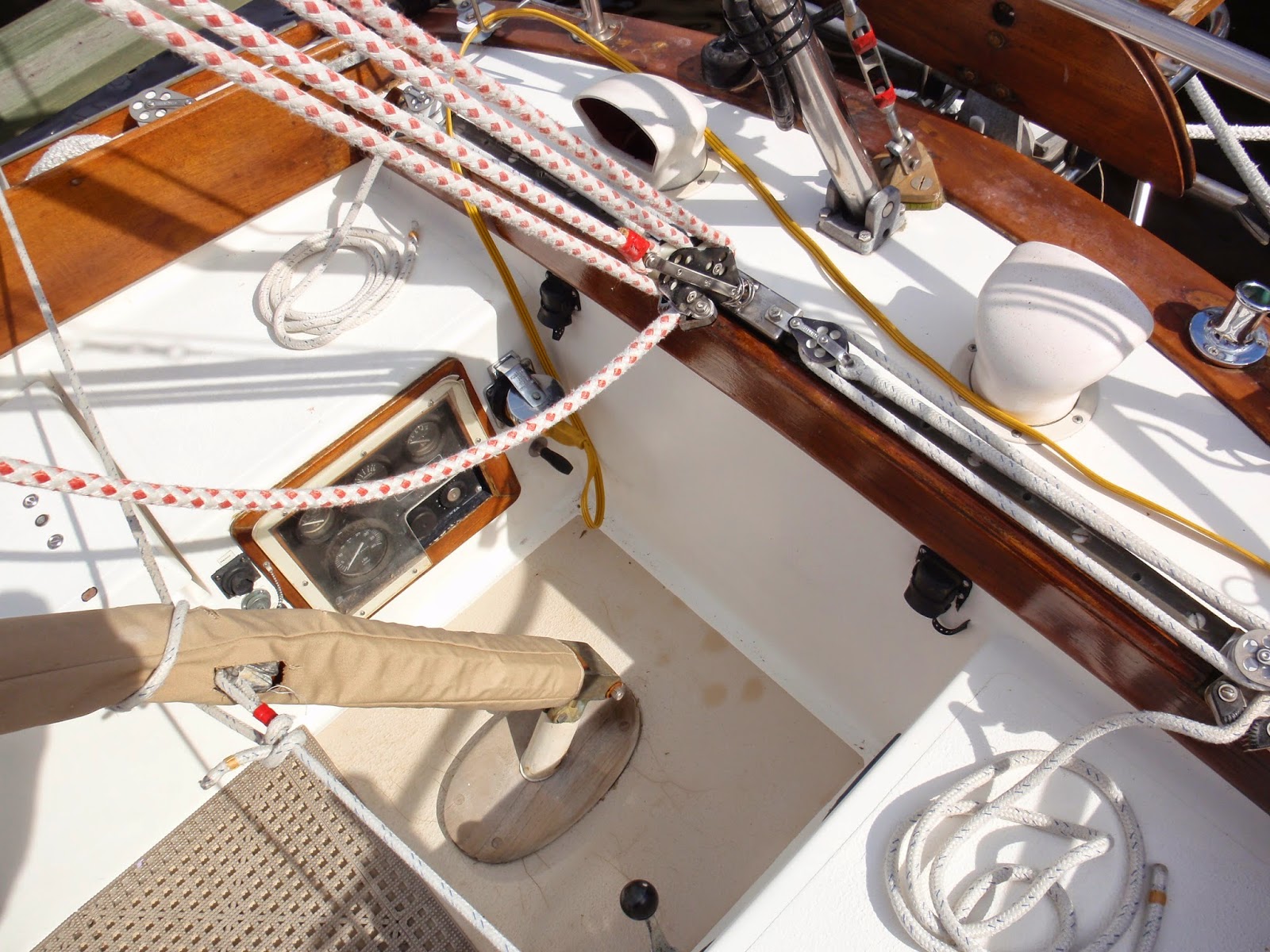 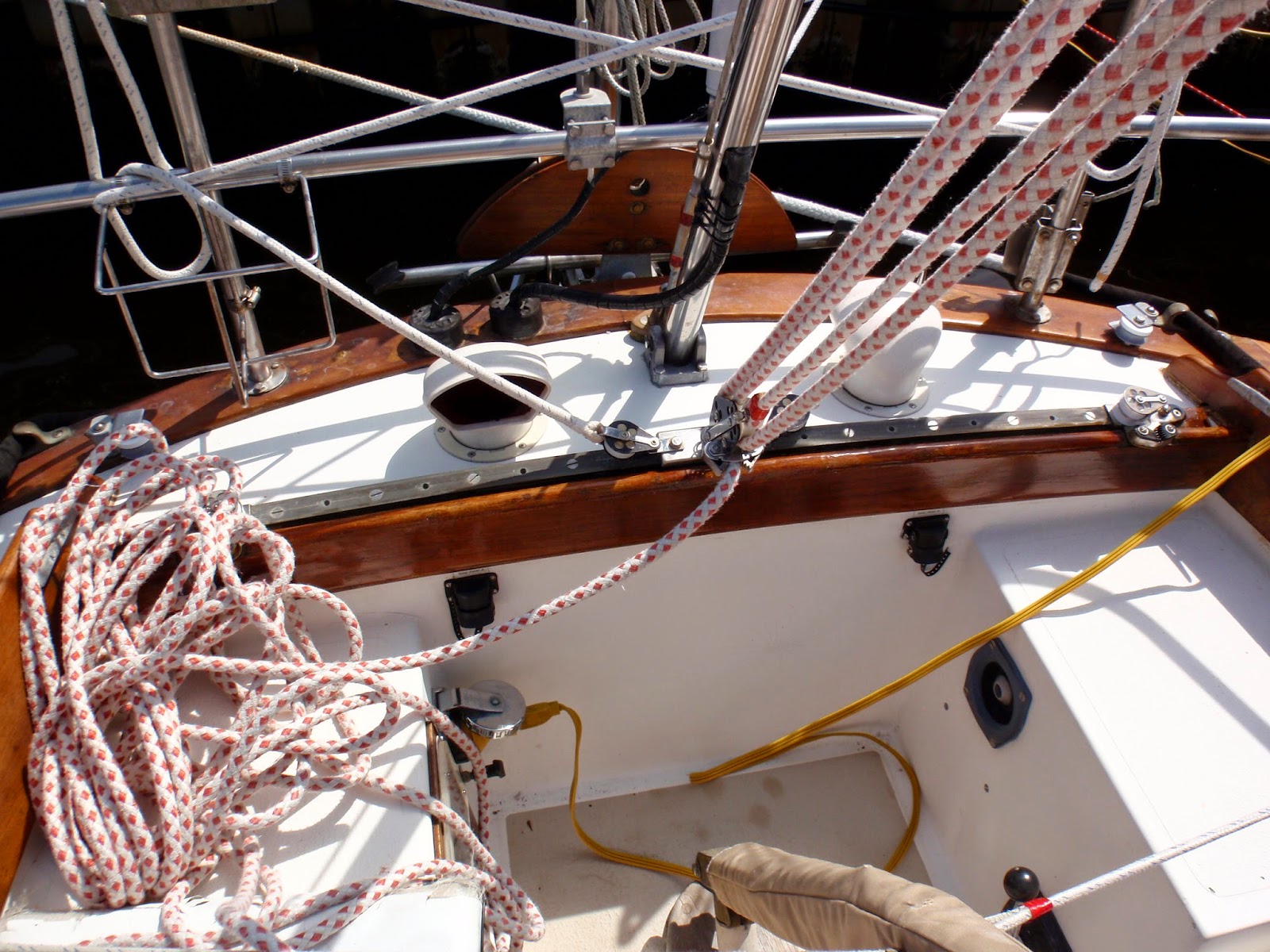 Next the shop cut and welded a piece of heavy stainless bar with part of a pin shackle.  I wired the spring mount in a compressed position while the block itself was secured to the base by welding.  The preliminary result is shown at left, and the final result at right.

Aboard the "Kerry Deare of Barnegat" Local Time 12:25 No comments:

The CD 28 vintage 1981 employed an ash plank at the bow to support the anchor, and also to move the sail plan forward for balance.  The headstay was moved forward a bit and supported by a bobstay in later models.   Later versions also replaced the ash with teak.

Unfortunately ash is not well behaved when unprotected, unvarnished or (to put it mildly) actually used.  The result of such exposure is shown in the photo.  Yuck. 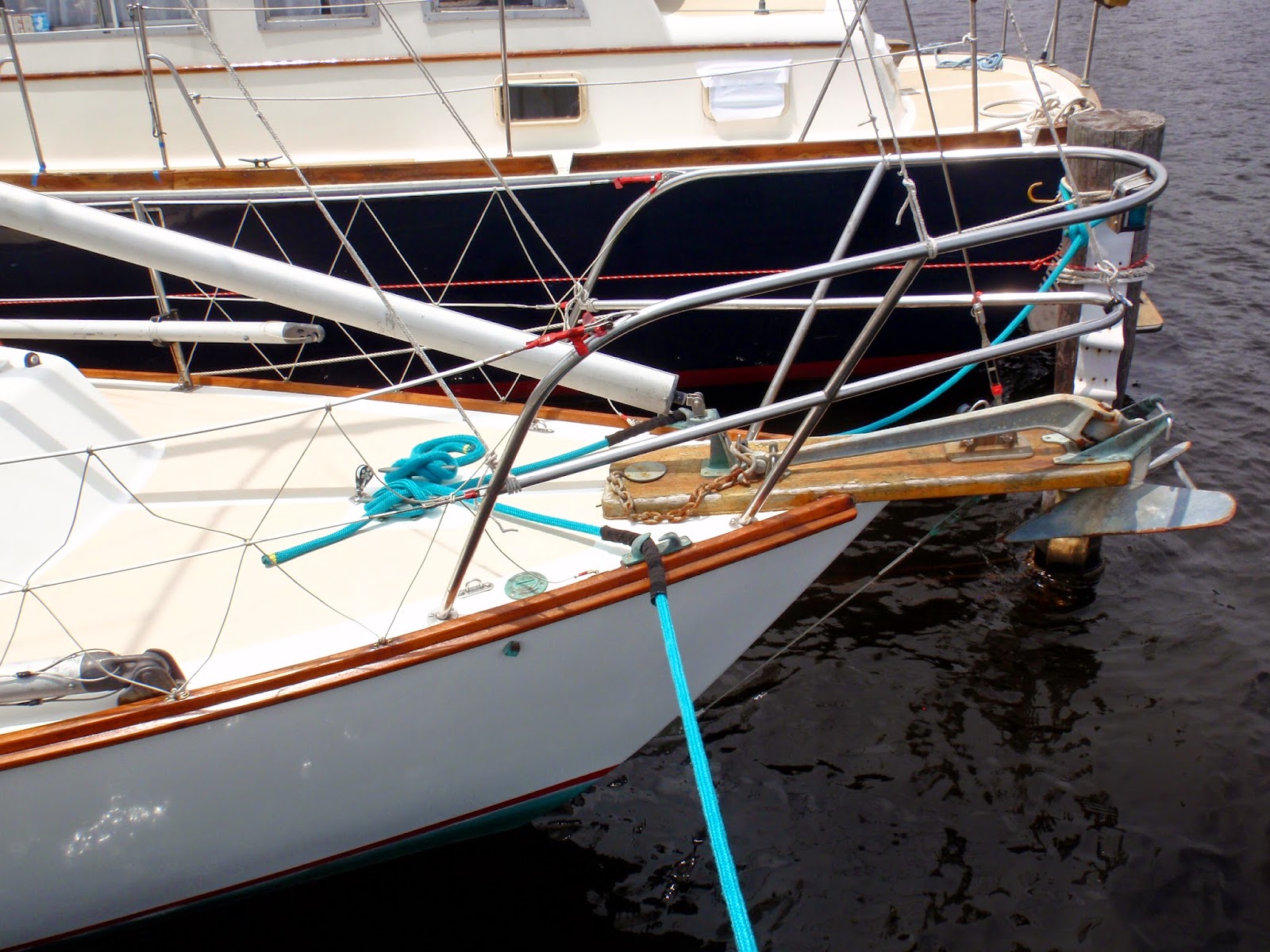 This means that every so often (a.k.a. too often) folks like me take the wood down to bare wood and start over.  Here's what this process look like after perhaps 3 or 4 delightful hours on one's knees. 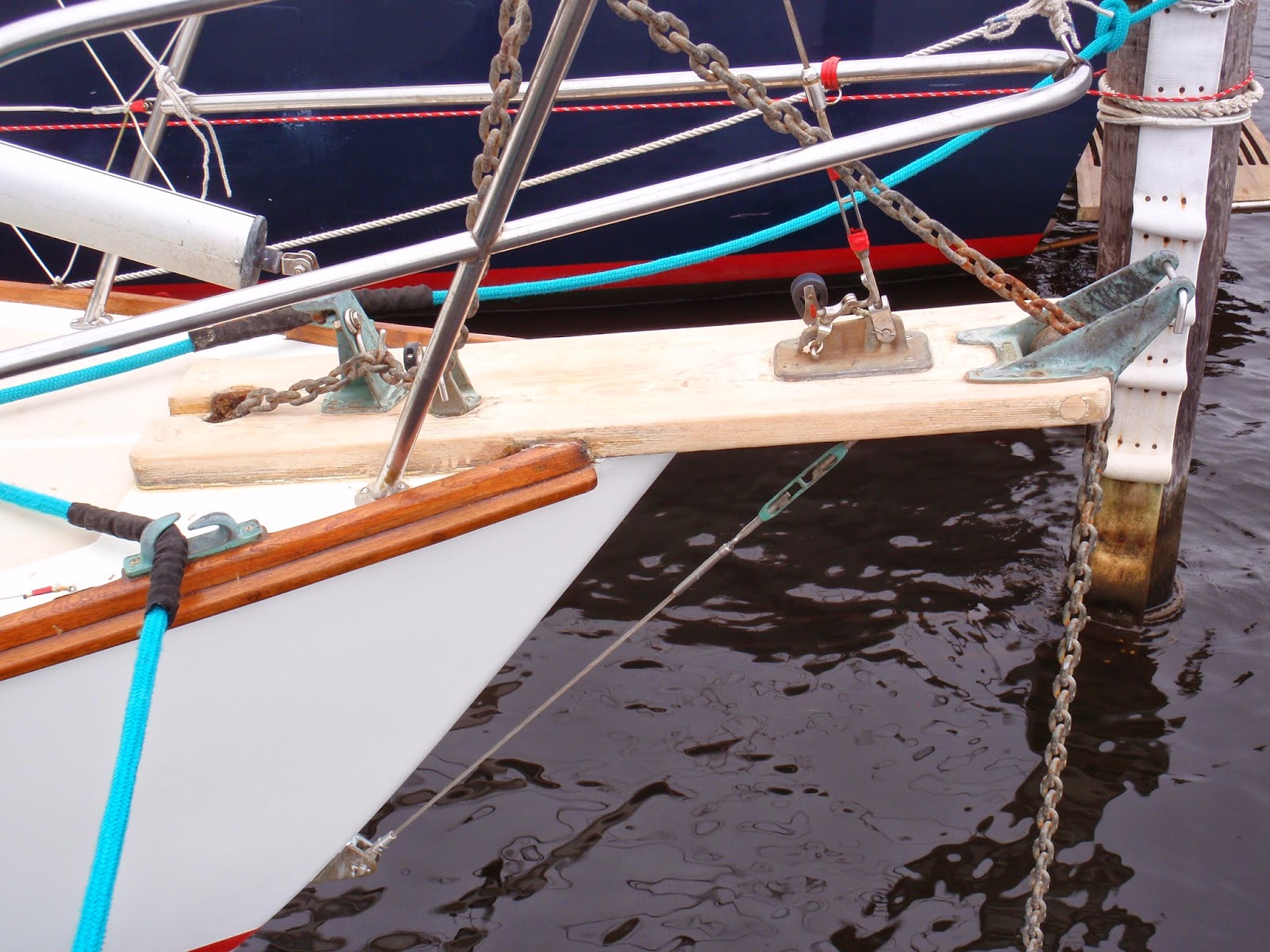 The next step is to recoat with varnish.  In our case we went with 4 coats of (cheap) varnish, followed by machine sanding.  This provides a base to allow the final varnish coats.  I decided on 3 additional coats (for a total of 7), and found the result more utilitarian that glamorous.  Works for me. 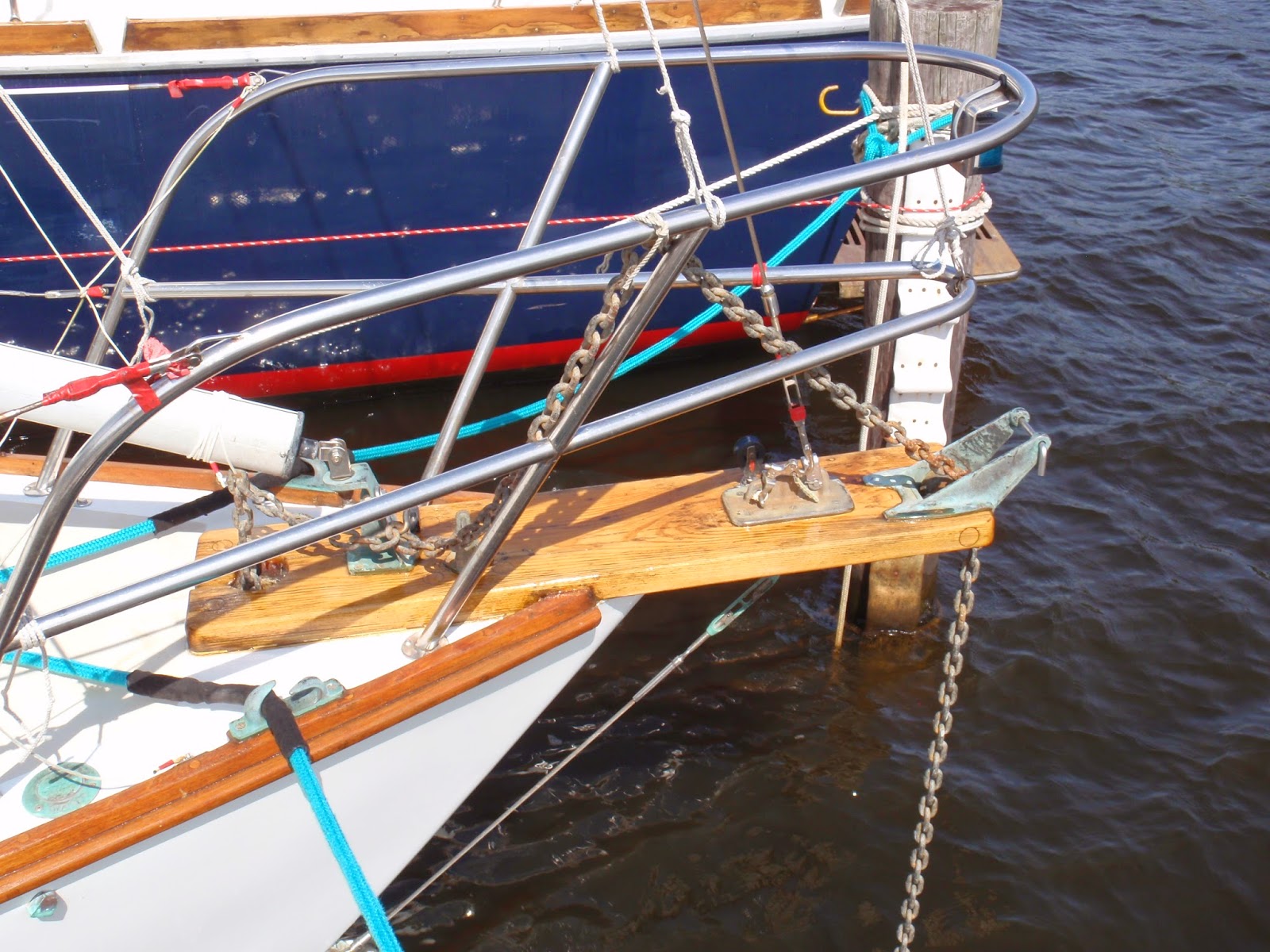 And finally the result: 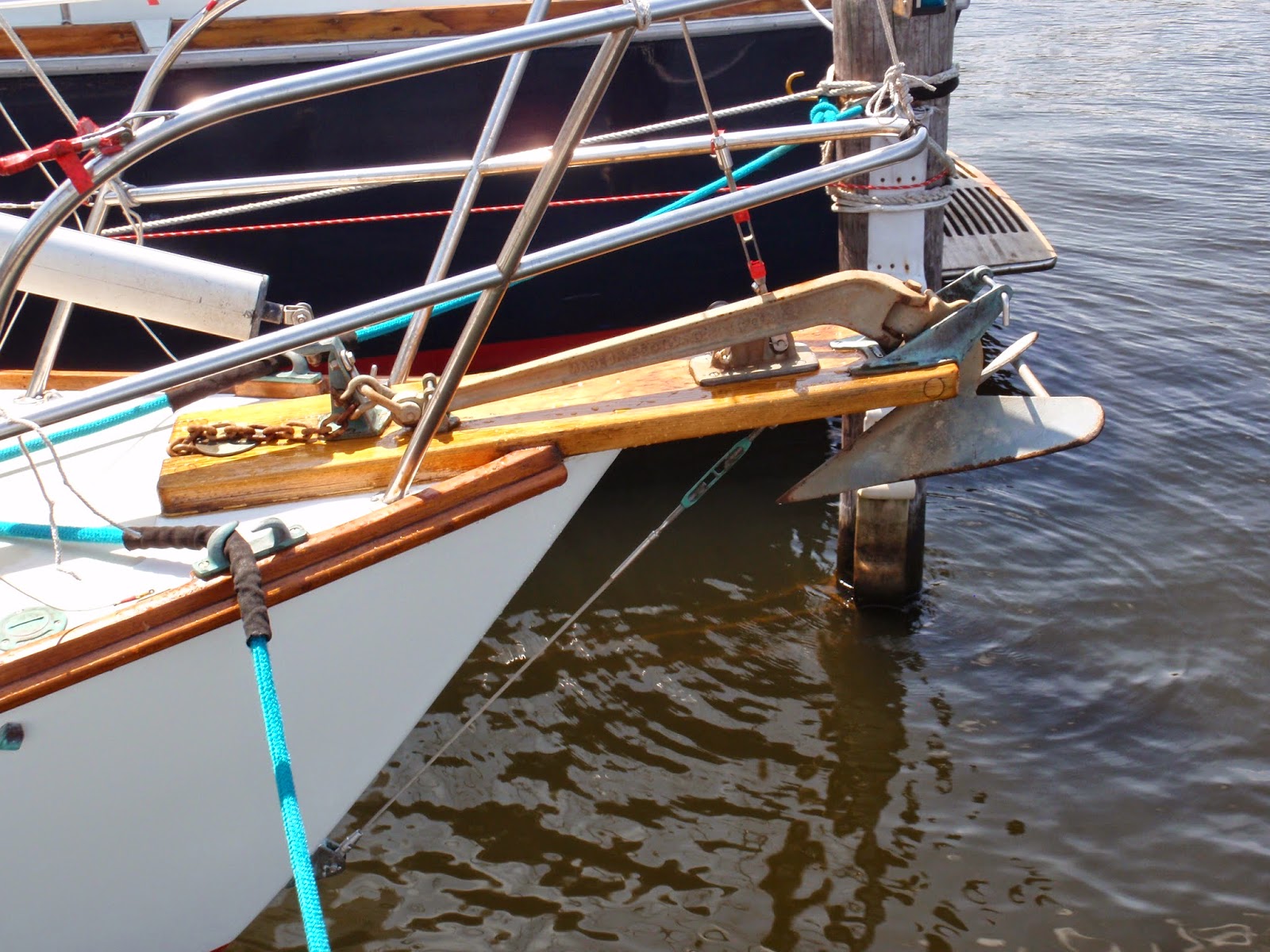 Aboard the "Kerry Deare of Barnegat" Local Time 16:31 No comments:

It's been a while but this time we intend to follow through.  Yacht "Kerry Deare" went into the water on 01 June 2014, and the saga begins again.  We are presently working to restore (if that's the word) this yacht to operational condition.  That should be rather simple, because all that is necessary is to overcome a few seasons of layup (and all that entails).

So far the wood trim on deck has been under attack, the cabin sole has been brought up to snuff, and the diesel cooling system has been checked and repaired.  More to follow.


Aboard the "Kerry Deare of Barnegat" Local Time 17:17 No comments:

Well, Summer 2013 wasn't exactly about sailing.  However it was a little about New England (by car), a lot about family, and little more about ... just about everything.  And now for something completely different.

Yes, I know you thought this post was about the oldest zoo in the United States, the Philadelphia Zoo.  Well, I tricked you, and to make up for that here are the mandatory pics.  Then we'll get down to business. 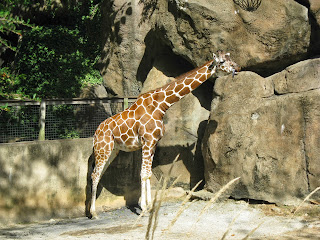 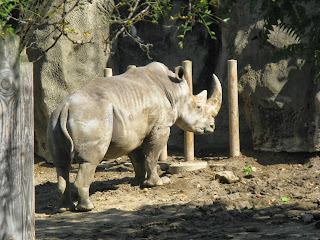 OK, now for the real stuff.  My informed readers know that the Zoo is a few blocks from "The Neighborhood."  Naturally we went there first, heading north on Girard, making a left at 36th Street one block over to Cambridge, and then up Cambridge toward 40th.

The view up Cambridge from below 39th: 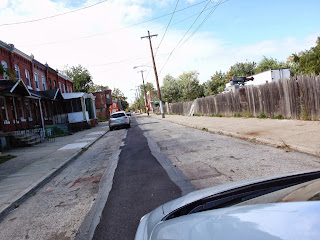 Union Street between Cambridge and Poplar, Jim's old house toward the left end of the row: 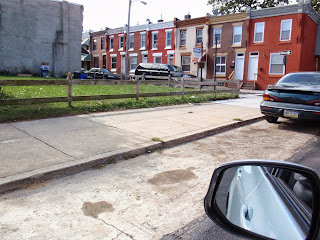 40th and Cambridge, looking up Cambridge.  No more "Gitaveigh": 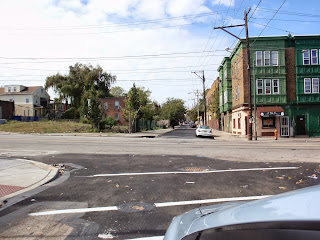 What's left of 40th between Cambridge and Poplar (no more King Cole Bar): 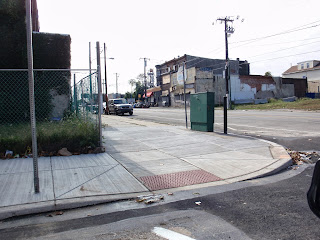 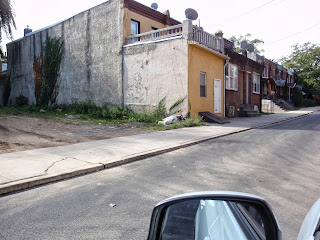 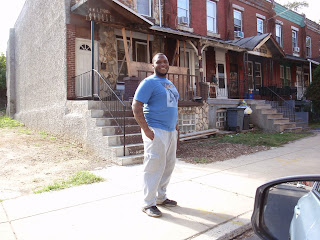 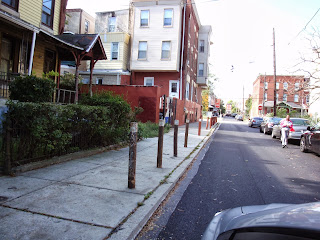 A glimpse at the carnage left by Storm Sandy along the Toms River. This is a local marina called Shore Point. 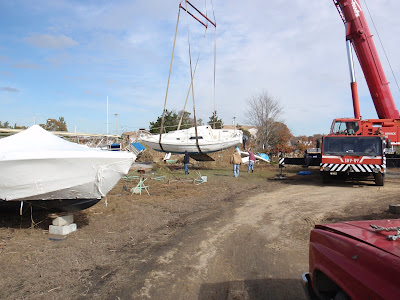 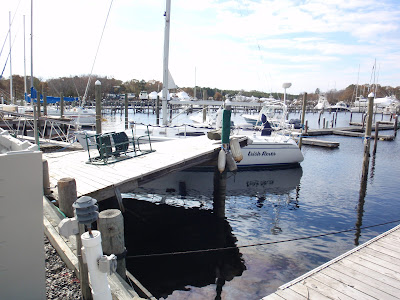 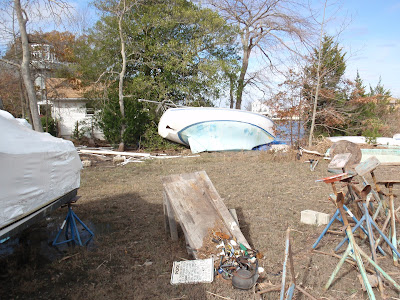 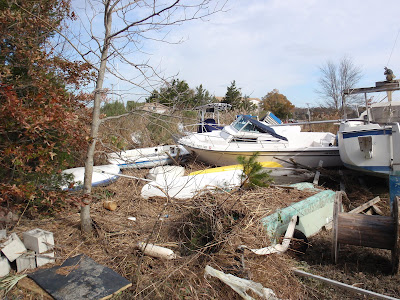 Aboard the "Kerry Deare of Barnegat" Local Time 08:29 No comments: 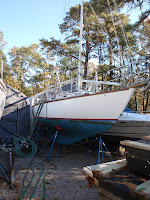 We hauled a few days before the storm's arrival.  In the photo at left you can see what a well hidden small sailing boat hiding along the NJ coast looks like.  The sailboat was lying on Toms River directly west of Seaside Heights NJ, and there was no question that she had to get on the hard (and fast).  She did so thanks to Bill and the crew at deRouville's Boat Shoppe.  In fact she rode out the event without consequence.  Meanwhile Sandy has picked her victims in a decidedly opportunistic fashion.  I will provide details and images when time allows.
Aboard the "Kerry Deare of Barnegat" Local Time 13:23 No comments: